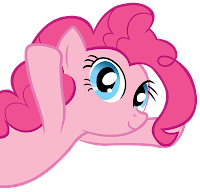 Heyooo! Hello there, people. It's been some time.
I don't have much to say, though! What I'm bringing you today is something small I came up with.

So, a few days ago I got in the mood of programming a simple idea. Basically, a minimalistic text-based 'RPG-like' battle, where you create a character and fight against other (AI) warriors. As simple as that.

So, I started doing it just for the fun of it, and then I realized, "Hey! If I think this is fun, maybe there's somebody else out there who could enjoy it as well", and so I wrapped it up and uploaded it. So, if you think you could enjoy it, go ahead and download it! It's in the Games & Contact section of the blog.


Anyway, what's the game like?
Pretty much, you name your character and battle against others in a free-for-all turn-based battle. It has some attribute customization (strength and intellect), and you can play as an Earth Pony, Unicorn, Pegasus or Crystal Pony. While doing damage, each character gains experience, and levels up, automatically increasing his/her attributes and health. And you can keep doing this as long as you want.
The game also saves your character's progress when you exit (pressing ESC), so you can come back later and continue it (you gotta remember your character's name, though, so write it down or something).

And if you're not into ponies, I've also included a 'non-pony' version of the game. It's just text, after all.

That's pretty much it, as I wanted to keep it simple. If I come up with more ideas, I may keep updating the game! But anyway, have fun, and let me know what you think. 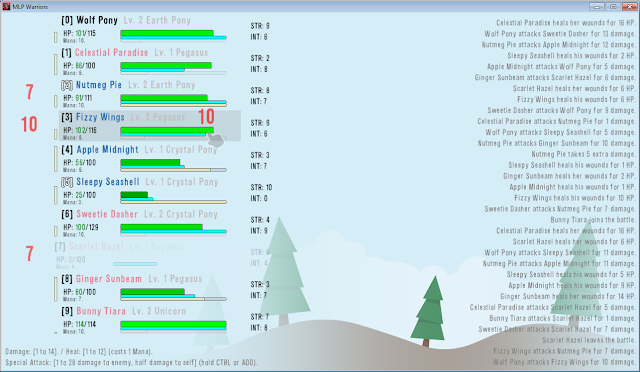 Edit (Sep 8th): I updated the game to change some stuff and add a few new features (including sound). There was also a bug that prevented some characters to be saved, which is now fixed.